The “To Continue or Be Remembered: Perpetuating and Sharing Alaska Native Arts” is a Joint venture with the UAF College of Liberal Arts Native Art Center and The College of Rural and Community Development to bring the longstanding visiting master artist program at the Native Art Center to the UAF rural campuses.

"I have been carving since I was about 8 to 10 years old. I learned how to carve from my Late Father, as well as from my Grandmother, who passed away at the age of 92, in 1992. I am the only carver in our family, and also the only carver from my village of Eek.

My work has been displayed and sold to both private and institutional collectors, throughout Alaska and the nation. I make my own tools, the traditional way, and also have been teaching my four sons as well as my 6 year old grandson, who are now carving with me. I have taught traditional crafts to students at the University of Alaska Fairbanks / KUC, in Bethel, Alaska.

I am also featured with my mask, in a book called, “The Living Tradition of Yupik Masks: Agayuliyararput: Our Way of Making Prayer” written by Ann Fienup- Riordan. I was also featured and interviewed by a film crew from the Musee du Quai Branly Museum Paris France, on their collection of Yupik Masks that were collected from the Yukon Kuskokwim Region."

One of Alaska's most prominent sculptors, Kathleen Carlo-Kendall (Koyukon Athabascan) is best known for her surrealistic masks representing human beings, spirits and animals, often ornamented with metal embellishments, shell casings, found objects, bones and feathers. She also produces relief-carved panels reflective of her connection to the homelands of the Koyukon people. In the late 1970s Carlo-Kendall emerged as one of the first Alaska Native women to carve wood, traditionally considered men's work. As masks were not used extensively by her people, she turned to the sculpture of the Yup'ik and other cultures for inspiration. Such departures from tradition helped open the door for future artists. (American Indian Art Magazine winter 2010-Steve Henrikson)

From the artist: "I am the oldest of 14 children, 9 boys and 5 girls. I was born in Fairbanks to Lloyd and Amelia DeWilde. My mother is full Koyukon Athabascan from Huslia and my father is Welsh/Flemish from San Francisco. I was raised on the Yukon River between Ruby and Galena until age nine. We then moved to the North Fork of the Huslia River, about 45 air miles from Huslia. We lived a subsistence life of hunting, fishing, trapping and gardening. I was seven when my mother started me sewing and knitting doll clothes and my father started me trapping squirrels and weasels. At age 11 my father started me running a dog team. By age 13 my mother taught me how to make slippers and boots, more knitting and crocheting. My father taught me how to shoot guns, trap for mink, fox, otter and snare beaver. Mother taught me how to snare rabbits and ptarmigan, and how to fish with nets and poles. We also did a lot of drawing and crafts. Over the years I've learned more about beadwork from my grandmother, watching others, reading books, going to museums and workshops, and listening to my elders. My Indian grandmother and mother are excellent beadworkers and skinsewers. About twenty years ago Denise Hardesty taught a workshop on caribou tufting that I attended. My white grandfather was a well known painter, artist and professor in San Francisco. I have 7 children. I fish in the summers on the Yukon River and sew. 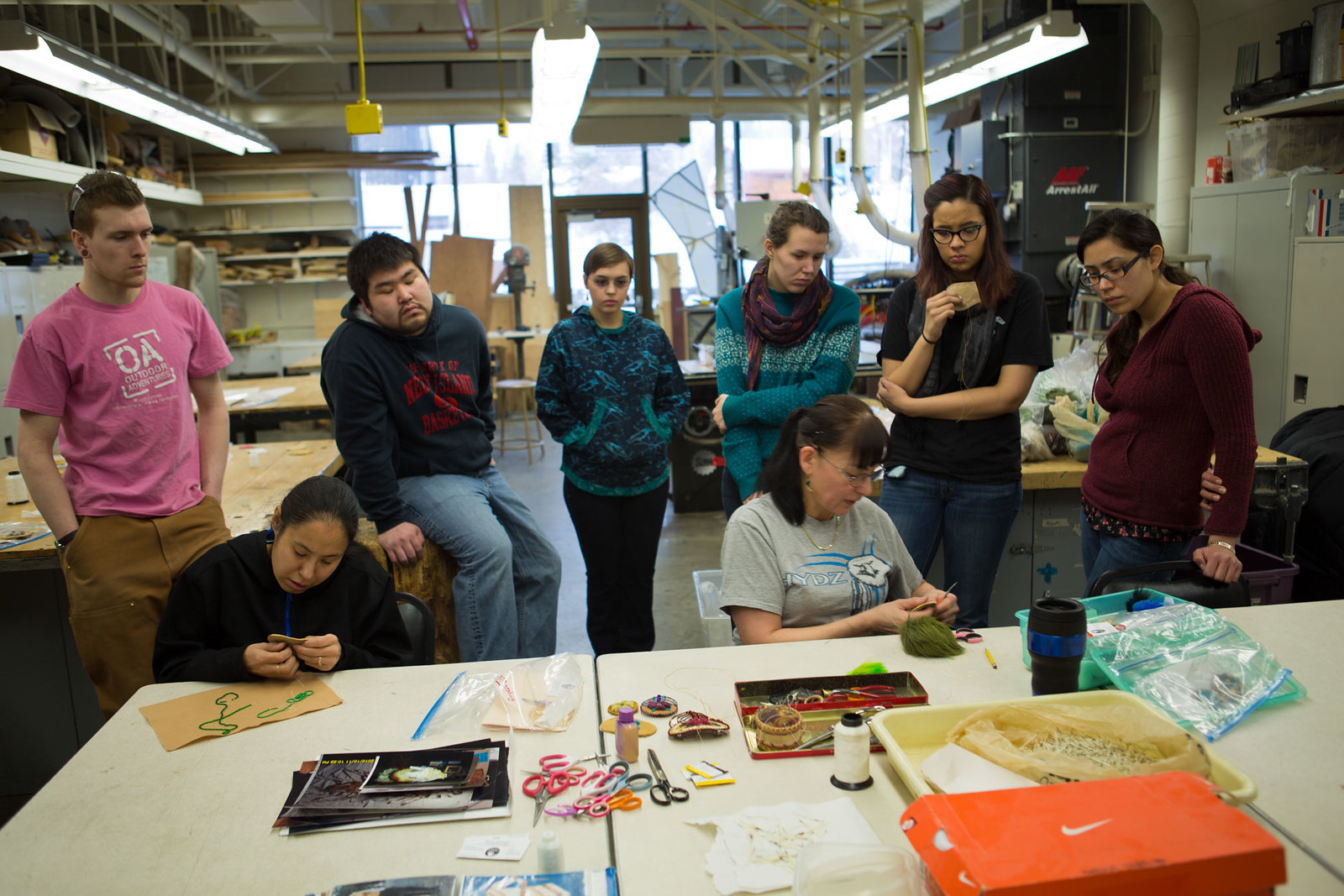 Sharon Kay is Unanga{ (Aleut), Swede, Irish, and Russian on her mother's side and Tlingit on her
father's side. She is originally from Unga Island and is a member of the Unga (U}naasaqa{) Tribe.

In 1983, Sharon learned to weave Attu baskets. Parascovia Lokanin Wright who was originally from
Attu Island was her teacher. Sharon has taught many Attu basket weaving classes at the Alaska
Native Heritage Center in Anchorage, Alaska, to high school students and adults; and for many
years at Sand Point's Youth Culture Camp and community members, including culture camp classes
for four or five years at the Aleutian Pribilof Islands Association in Anchorage, AK.

Many articles have been written about Sharon's work. She is featured in By Native Hands – Woven
Treasures from the Lauren Rogers Museum of Art, and the Aleut Art – 2nd revised and expanded edition as well
as other books.

Sharon has worked on research projects for the Aleutian Pribilof Islands Association's Cultural
Heritage Department: the Online Aleut Collections at Harvard University's Peabody Museum of
Archaeology and Ethnology; the American Museum of Natural History in New York city which
included, identifying Aleut textiles in the ethnographic materials from Fortress Island and identifying
and documenting all the North American Ethnographic Collection of Aleut basketry. She has
conducted research with archaeological basketry and baskets in ethnographic collections at the
Anchorage Museum of History and Art. She was Project Advisor to the 2005 exhibition By Native
Hands, Woven Treasures from the Lauren Rogers Museum of Art in Laurel, Mississippi.

In 2006, Sharon traveled to France: Paris and Boulogne sur Mer to assist in photographing and
documenting the Unga Cave Collection. She may perhaps be the first Unanga{ from Unga Island to
view the mask collection since it was taken from the Unga Cave in 1871 by Alphonse Pinart.
Sharon has written, illustrated and self-published a successful book - Learn to Weave and Attu Basket.
Sharon's baskets have been purchased by collectors throughout the world, and she carries the title
“Traditional Culture Bearer”.